Clone troopers were the soldiers of the Galactic Republic. They fought alongside the Jedi Order during the Clone Wars but turned on them when Darth Sidious activated Order 66. They were gradually replaced by Stormtroopers of the Galactic Empire.

Grown at an accelerated rate and raised in the laboratories and facilities of Kamino, the clone troopers were trained throughout the first ten years of their lives to become one of the most efficient military forces in galactic history. Bred for the sole purpose of combat, the clones were indoctrinated with unwavering obedience to the Galactic Republic and—more specifically—their Commander-in-Chief, the Supreme Chancellor.

For roughly three years, the clone troopers fought to defend Republic sovereignty against the Separatist rebellion. Throughout the conflict, the Jedi Generals served as commanders and generals of the Grand Army and, thus, they serve alongside their clone soldiers on many occasions.

Some years before the Invasion of Naboo, Jedi Master Sifo-Dyas believed the galaxy was going to fall into war but was kicked from the Jedi Council for his view. He went on to contact the Kaminoans and acting without the council's permission he comissioned an army of clone soldiers.

Sifo-Dyas was soon killed afterwards by the Pyke Syndicate who were hired by the Sith. Darth Tyranus took over the project following the Invasion of Naboo and recruited Jango Fett to be the template of the clones.

Obi-Wan Kenobi tracked Jango Fett to Kamino in 22 BBY and discovered the project. Later on Yoda traveled to the planet himself and recruited the Clones who were ready for battle and took them to Geonosis to rescue the Jedi strike team there. The Battle of Geonosis marked the beginning of the Clone Wars and Jedi led the Clones into battle against the Separatist army.

Throughout the war the Clones continued to serve their Jedi Generals, split into units such as the 501st Legion and the 212th Battallion. A few Clones showed disloyalty such as Cut Lawquane and Slick which showed that even though they were clones they had some differences due to personal experience and training.

Late in the war, 501st trooper CT-5555 "Fives" came across a conspiracy which ended up being Order 66 in the works. He was killed before he could properly come up with proof but was able to warn CT-7567 "Rex". Rex, CC-3636 "Wolffe" and Gregor all had their inhibitor chips removed.

Following the Battle of Coruscant, Order 66 was activated and Darth Sidious came to power. Clone Troopers across the galaxy executed their Jedi masters. Rex, Wolffe and Gregor did not obey due to their chips being removed and went into exile.

Clone Troopers served as the first army units of the Galactic Empire until Stormtroopers were created to replace them. The final known Clone Troopers to be produced and trained were the Inquisitor Troopers that followed Darth Vader and his Inquisitors.

Regular assault Clone Troopers, sometimes called "Regs" made up the majority of the Clone army in the early days of the Clone Wars. With plain white armor they were often called "shinies" until they joined a unit of their own and recieved color markings. There were some units still based on Coruscant that weren't attached to any legion. Towards the end of the war all troopers could use jetpacks if the mission or battle required it. 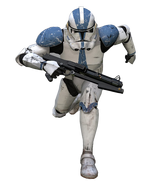 Clone Trooper from the 501st Legion

A Wolpack Trooper from the 104th Battalion 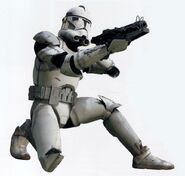 A regular trooper from the 41st Elite Corps

A trooper from Fil's squad 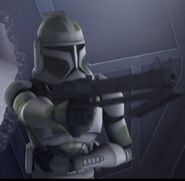 A trooper from Grey's battalion 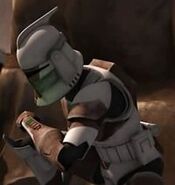 A trooper from Keeli's company

A trooper from Tango Company

Also known as Clone specialists, these are Clones with extra training in sniper and long range weapons on the battlefield.

These Clone Troopers were trained in the wielding of heavy weapons into battle.

Clone Trooper pilots were trained in the dangerous feat of piloting the many vehicles, ships and starfighters in the Grand Army of the Republic. 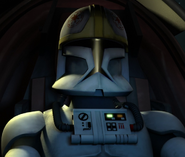 Clone pilot of Blue Squadron, affiliated with the 501st Legion 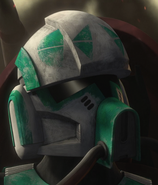 Although regular Clone Troopers could use jetpacks and often did towards the end of the war, a specialist Clone unit was created for the sole purpose of jetpack combat. They were often armed with a blaster pistol and a rocket launcher.

A jumptrooper of the 501st Legion

Clone Troopers of the Coruscant Guard sported red markings. They were based on Coruscant and served as security guards for members of the Galactic Republic.

The Clone Troopers assigned with the job of protecting the Clone factories on Kamino. The team was created following the Battle of Kamino after realisation that Tipoca City needed security. 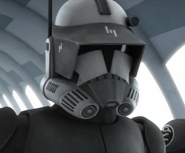 These Clone Troopers were assigned to stealth missions and missions that would require camoflauge.

The scout troopers of the early Clone Wars that were trained in survival instincts and the piloting of AT-RT walkers. 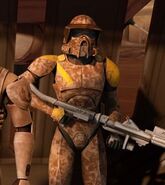 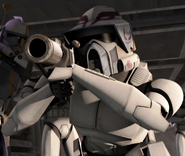 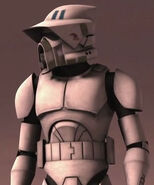 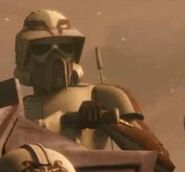 ARF Troopers becames solely for driving AT-RT walkers when more specialised Scout Troopers came in. They took part notably in the Battle of Kashyyyk. The ones on Kashyyyk were part of the 41st Elite Corps and were led by Commander Gree. Imperial Scout troopers would later follow this design.

Injured Clone's are treated on the battlefield by medics. Medics carry around medical gear and are trained in the area of treating the injured.

These Clone's are equipped for cold worlds such as Orto Plutonia.

ARC troopers were elite troops within the army. Their training made them more advanced then regular clones. They tried out the phase II prototype armor earlier on therefore being the first to use it. A few ARC troopers were trained from the start but as the clone legions and battalions were established, troopers that showed incredible skill, bravery and success in battle were given the rank of ARC and received special training to enhance their skills. ARCs often used twin blaster pistols as their weapons of choice. 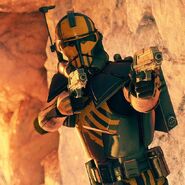 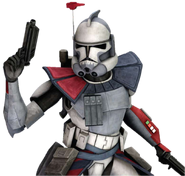 Clone Commandos were elite clones that received special training and programming as commandos. While ARCs worked better inside their battalion, Commandos often worked in squads of four or a few more while they were active. Clone Commandos kept their same armor for the entire war and didn't change to a phase II variant and were allowed varying color markings as they didn't belong to a Clone Unit.

Clones were trained from a young age and were bred specifically for war. They started as young boys and with their accelerated growing rate they finished as adult cadets. Adult cadets were split into squads and following their final test they were assigned to either a legion or are selected to be a special unit such as a ARC Trooper.

Clone Troopers served under the Galactic Empire following Order 66 and for a little while the phase 2 troopers were the face of the organisation until the creation of non-clone Stormtroopers. Even after the creation of Stormtroopers, Clones served as trainers or retired. The last batch of Clones served under the Inquisitorious and were known as Imperial Purge Troopers.

Community content is available under CC-BY-SA unless otherwise noted.
Advertisement