Straight after the events of The Force Awakens
Star Wars: Episode VIII The Last Jedi is the eighth film in the Star Wars Saga. It was written as well as directed by Rian Johnson and was released on December 15, 2017.

With the destruction of the Republic, the evil First Order reigns. Now, Supreme Leader Snoke looks to crush what's left of the Resistance and cement his grip on the galaxy. But hope survives: Rey has found Luke Skywalker, a legendary Jedi Master who can change the tide of war.

Shortly after the battle of Starkiller Base, General Leia Organa leads Resistance forces to flee D'Qar when a First Order fleet arrives. Poe Dameron leads a costly counterattack that destroys a First Order dreadnought, but after the Resistance escapes to hyperspace, the First Order tracks them and attacks the Resistance convoy. Kylo Ren, Leia's son, hesitates to fire on the lead Resistance ship after sensing his mother's presence, but his TIE fighter wingmen destroy the bridge, killing most of their leadership and incapacitating Leia, who survives by using the Force. Disapproving of new leader Vice Admiral Holdo's passive strategy, Poe helps Finn, BB-8, and mechanic Rose Tico embark on a secret mission to disable the First Order's tracking device.

Meanwhile, Rey arrives on Ahch-To with Chewbacca and R2-D2 aboard the Millennium Falcon to recruit Luke Skywalker to the Resistance. Disillusioned by his failure to train Kylo as a Jedi, and under self-imposed exile from the Force, Luke refuses to help – even after he learns of Han Solo's death at Kylo's hands – and believes that the Jedi should become extinct. Unbeknownst to Luke, Rey and Kylo communicate through the Force, puzzling the two enemies. As Rey and Kylo learn about each other, each has future visions of themselves as partners.

R2-D2 persuades Luke to train Rey. After Kylo tells Rey what happened between him and Luke that caused him to choose the dark side of the Force, Luke confesses that he momentarily contemplated killing Kylo upon sensing that Supreme Leader Snoke was corrupting him, causing Kylo to destroy Luke's new Jedi Order in retaliation. Convinced that Kylo can be redeemed, Rey leaves Ahch-To without Luke. Luke prepares to burn the Ahch-To Jedi temple and library, but hesitates. Yoda's ghost appears and destroys the temple by summoning a thunderstorm, claiming Rey has all she needs to learn, and encourages Luke to learn from his failure.

Holdo reveals her plan to discreetly evacuate the remaining Resistance members using small transports. Believing her actions cowardly and risky, Poe leads a mutiny. Finn, Rose, and BB-8 travel to the Canto Bight casino and acquire the help of the hacker DJ. They infiltrate Snoke's ship, where all but BB-8 are captured by Captain Phasma. Meanwhile, Rey lands on the ship, and Kylo brings her to Snoke, who claims that he facilitated the mental connection between her and Kylo as part of a plan to destroy Luke. Ordered to kill Rey, Kylo instead kills Snoke and defeats Snoke's guards alongside Rey. Rey believes that Kylo has returned to the light side of the Force, but he instead invites her to rule the galaxy with him, which she refuses. They use the Force to fight for possession of Anakin Skywalker's lightsaber, which splits in two.

Leia recovers and stuns Poe, allowing the evacuation to begin. Holdo remains on the ship to mislead Snoke's fleet as the others flee to an abandoned Rebel Alliance base on Crait. DJ reveals the Resistance's plan to the First Order, and the evacuation transports are slowly destroyed. Holdo sacrifices herself by ramming Snoke's fleet at lightspeed; Rey escapes in the chaos, while Kylo declares himself Supreme Leader. BB-8 frees Finn and Rose, who escape after defeating Phasma, and join the survivors on Crait. When the First Order arrives, Poe, Finn, and Rose attack with old speeders. Rey and Chewbacca draw the TIE fighters away with the Falcon, while Rose stops Finn from completing a suicide run against the enemy siege cannon, which subsequently penetrates the Resistance fortress.

Luke appears and confronts the First Order to enable surviving Resistance members to escape. Kylo orders the First Order's forces to fire on Luke to no effect. He then engages Luke in a lightsaber duel; upon striking Luke, Kylo realizes he has been fighting a Force projection of him. Rey uses the Force to help the Resistance escape on the Falcon. Luke, exhausted, dies peacefully on Ahch-To. His death is sensed by Rey and Leia, and Leia tells surviving rebels that the Resistance has all it needs to rise again. At Canto Bight, one of the children who helped Finn and Rose escape grabs a broom with the Force and gazes into space. 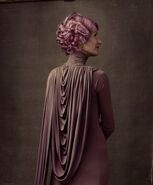 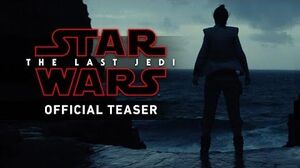 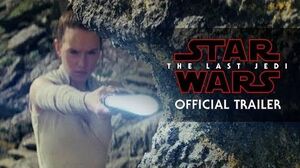