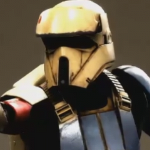 Hello there. I'm TK-32028, known simply as TK sometimes, and I am a Grand Admiral of the Star Wars Canon Wiki. I'm a hardcore Star Wars fan. My username is derived from TK-32028. I want to make this wiki a better place, and contain more information, despite the large amount of redlinks. I can be found working on articles on stuff from the films and other media. Contact me or another admin if you need help or have questions! And also be sure to read my custom biography (see below).

I was born on Carida prior to the Invasion of Naboo. After the Clone Wars, I took a job in the Imperial Army as a Stormtrooper. After this, I killed many rebels, and was soon a high-ranking stormtrooper in the imperial ranks.

In 3 BBY, I was then promoted to a Shoretrooper Captain because of my progress reports. and successes. I then participated in the Battle of Scarif where I led my Imperial Shoretroopers to battle along with regular troopers. After I witnessed the Death Star destroy the Citadel Tower, I fled aboard a nearby Lambda-class T-4a shuttle. Fleeing to Geonosis, I discovered an abandoned droid factory nearby.

I realized that I could create Battle droids to help enforce the Empire. We needed more stuff to train the stormtrooper cadets-in-training. I reactivated it, and worked on processing BX-series droid commandos and LM-432 crab droids.

After I delivered the supply of training droids to the empire, my superior, Darth Vader, learned that there was a clone uprising on Kamino. As a result, he tasked me and Boba Fett to lead the 501st Legion to crush the uprising. We arrived there in the Devastator, and a force of eight Imperial landing craft headed to the surface. Once we got there, the renegade Clone Troopers started attacking us. Me and a part of the 501st pushed on towards the cloning facilities, while Fett and the rest fought clones both inside and outside. Once I got to the main facility, the renegade troopers appeared and fired on us. I got out my Z-6 rotary blaster cannon and blasted back. My men fired as well. Lost some of my men, but we were able to destroy everything in the facility. Meanwhile, Fett's troops had been able to repel the clone troopers and had put explosives on the area's perimeter. After me and my men got out, I ordered everybody to fire on the Kaminoan clonemasters who were fleeing in Low Altitude Assault Transport/infantrys. We fired, and the gunships were shot out of the sky. Me, Boba, and the 501st soon headed back to the Devastator, then for Imperial space.

Retrieved from "https://star-wars-canon.fandom.com/wiki/User:TK-32028?oldid=78459"
Community content is available under CC-BY-SA unless otherwise noted.